Home Places Antalya – The city on the Turkish Riviera 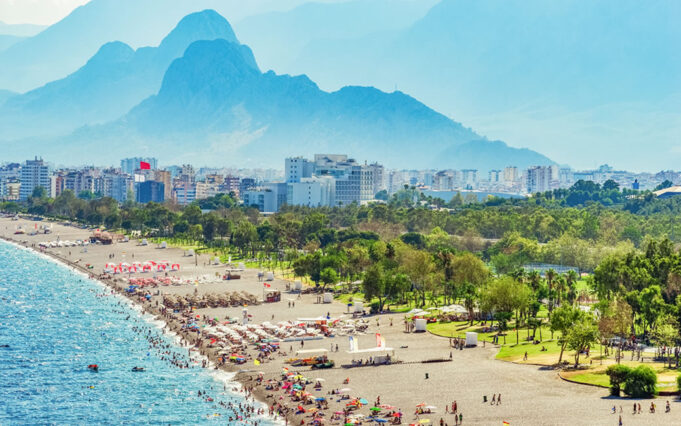 The Turkish city of Antalya is a million dollar paradise for junkie travelers and Euopean tourists; it is as popular as Mallorca. Each year, a large number of Turkey holidaymakers go travelling to the fertile coastal plain in the south of Turkey.

Get Lost in the Paradise on Earth

Antalya is the paradise on earth – at least if we may believe the tradition. King Attalos gave the name to the city once, later on it became Antalya. Thanks to the very fertile environment and the natural harbor of the countryside; this made it an ideal settlement area.

More and More Tourism in Antalya

In the Byzantine period, the city was an important center of Christianity. Today, the town in the province is an ever growing tourist center. In the region there are over 150 five-star hotels. The airports in major metropolitan regions in Germany like Berlin, Hamburg and Munich have flights to Antalya directly.

The city of beaches- The kilometer-long sandy beach Konyaalti

Antalya is known for its many long beaches. The Lara beach, for example, is a mile- long sandy beach; the Konyaalti beach consists of gravel. If you like it a bit smaller, then go for Mermerli sandy beach. In particularly clear water travelers like to swim on the beach Adalar. Here junkie sun worshipers relax on a large platform and climb up a flight of stairs into the water next to the cliffs. However, for children, this beach is not really suitable.

Culture lovers will find during their holiday in Antalya their missing treasure. The landmark of the city is the Fluted Minaret , Mosque in the center . A venue for travelers is also known as the Hadrian’s Gate. It is the only remaining entrance to the ancient city and the harbor.

Not Just Culture but a Fantastic NIGHTLIFE!

Some of the many attractions are the Roman Arapsu Bridge in the west of Antalya, the archaeological museum of the city and the Clock Tower overlooking the marina. The old harbor itself is also worth a visit. Here, travelers can take part in various boat trips. Around the marina there are numerous restaurants, bars and discos. The nightlife around the harbor is always kicking.

A visit to a typical Turkish bazaar is also possible in Antalya. On the open every day “folk Bazaar”, dealers are competing for travelers and potential shoppers. One should be prepared for unfair offers and aggressive traders and merciless haggling. You should also find out about the import regulations in the home country.
The Garden of Religions and Tolerance

Antalya is the garden of tolerance. There you can see a mosque, a synagogue and a church, all erected next to each other in the central square; this has given Antalya the title of the “Garden of Religions.” The place is mostly visited by travelers of different backgrounds and cultures. Another recommendation for nature lovers is the Karaalioğlu Park as the oldest park in the city with 7,000 square feet of space.

Antalya is ideal for outdoor sports enthusiasts. At all beaches, travelers go for windsurfing, parasailing, water skiing, paragliding and Jet Ski riding and other extreme water sports. Thanks to the good water quality, there are numerous diving centers. The adventurous go for the jeep safari through the beautiful Taurus Mountains and if the weather cooperates, water skiing can be performed safely.

Get Ready to Pitch Your Tent

Tanzania is Ready for a Brand New Year