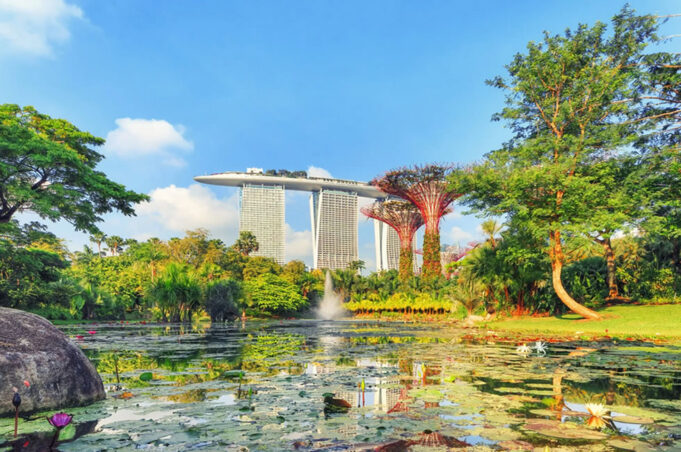 If Singapore’s neighborhoods were people, Queenstown would be a warm and loving grandma with many interesting stories under her belt. As one of the oldest neighborhood in Singapore, Queenstown is a treasure trove of secrets made up of dated aesthetics and photogenic places for visitors to explore.

With most of my growing up years spent here, this neighborhood is very close to my heart. There’s so much more here than just old housing estates and IKEA. With the estate’s rich history along with the makeovers and face-lifts it has undergone in the past years, you’ll be surprised to find that Queenstown offers up a side of Singapore that rivals the most indie and hipster local streets.

Now, let’s put aside the typical tourist attractions, and find out what’s been hidden under wraps.

Chill Out At Singapore’s most idyllic McDonald’s

The Ridout Tea Garden, formerly known as the Queenstown Japanese Garden, was opened in 1970 and is Singapore’s first Japanese-styled garden. The original garden housed a fountain with large pool, along with a U-shaped row of shops to provide dining, shopping and recreational activities for Queenstown residents. Sadly, a fire broke out in 1978 and due to the layout of the shops, firemen were unable to contain the fire. The entire garden went up in smokes.

The next year, HDB rebuilt the garden. As the Jurong Japanese Garden was already open by then, the new garden was reopened under a new name of Ridout Tea Garden so as to avoid confusion. The new attraction – with a tea kiosk, bridges and ponds – now serves more as a public community park than a shopping and dining area.

Today, a McDonald’s sits in the place of the Japanese-themed structures. Although a McDonald’s might not be on the list for most visitors, this one is pretty worth the trip. Take a leisurely walk around the garden and from the bridge, watch the terrapins sunbath on the rocks jutting out of the pond. Take in the bamboos and stunning greenery of the garden. And not to forget, an Instaworthy shot of the old brick wall that once belonged to the original Japanese Garden.

This is one of Singapore least discovered parks. In fact, many local residents have gone past it thousands of times without realizing it’s there. Built on top of a covered canal, this park stretches just 1.4km and links Commonwealth Avenue to Tanglin Road.

If you ask me, this place is a pretty good spot to take a romantic and leisurely stroll with your other half. Better yet if you are travelling with your family, take your little tots here because there are five – yes, five – different themed playgrounds.

Go Back In Time At Wessex Estate

Looking ultra hipster-ish with its black and white exterior, Wessex Estate is made up of colonial bungalows and flats. Built in the 1940s, these buildings used to serve as homes for non-commissioned British officers, soldiers and their families. Each block has a number and name which corresponds to a historical military feat of the British Army.

After withdrawing from Singapore, the government took over the estate and today it is also known as “Little Bohemia”. Its new purpose? An artsy enclave of creative spaces, art studios and homes for international and local artists. Its backdrop just screams, “Take pictures here!!!!” So come dressed in your own monochrome outfit for maximum impact in your photos.

Wessex Estate didn’t just serve as residential homes. As one might expect of the British, there was also a town square in the estate area providing necessities and food. Although you won’t find any convenience stores there today, the town square still stands and the shophouses have been converted to become restaurants and bistros. Which brings us to our next point…

Grab An Unpretentious Bite At Colbar

Short for “colonial bar”, Colbar was once a canteen for the British army barracks and military complex in the Portsdown area. Once marked for demolition, a petition to save Colbar succeeded on the condition that they relocate to their current site at Whitchurch Road. The owners made sure to retain the original features, decorations and fittings – the tiles and doors were reused and are from the original canteen itself!

The food itself isn’t anything fancy – it was a canteen after all. Serving up a fusion of local, Hainanese and Western food, its menu is unpretentious, just like the cafe itself. The interesting fusion is also due to the fact that the early cooks for the British Army were Hainanese immigrants from China. Everything about Colbar, from its decor down to the details carry an old-fashioned charm. You just can’t make a trip to Wessex Estate without paying a visit to Colbar too.

Climb Up An Abandoned Water Tank

Between the Portsmouth area and Woking Road are many interesting sights, but it’s the abandoned water tank sitting atop a hill that tops it all. Many people have described it to share an uncanny resemblance to an UFO. However, the structure, although sizeable, is pretty hard to locate. Just keep an eye out for camera-wielding hipsters and you’ll get there in no time.

Daredevils can climb up the ladder to get to the top of the water tank, but do so at your own risk – the water tank is pretty old and rusty. One thing for sure is that derelict structure provides plenty of different angles and photo-taking opportunities.

Inject some pastel tones into your feed at Singapore’s first stadium. From pinks, blues, greens to yellows, the sports complex is splashed in cotton candy colours. Once the hosting location for Singapore’s National Day parades, today the complex remains a well-known sports facility and it continues to draw many visitors.

There’s no other place in Singapore where you can find a cemetery nestled against a backdrop of towering housing estates. Built in 1887, this 130-year-old cemetery is also known as “Shuang Long Shan” or “Shan Wu Shu” (which translates to double dragon hill). The Hakka association Yin Fo Fui Kun purchased the land as it was considered good luck to be buried on a hill (cremations weren’t popular back then).

Seemingly untypical of a Chinese cemetery where gravestones are of different designs and arranged in random orders, the gravestones here look the same and are arranged neatly in rows. That’s because in 1969 the local authorities bought back the land for residential use, but since this is the only Hakka cemetery in Singapore, they acceded to the clan’s request to keep five acres of the land. Almost 3000 graves were exhumed, cremated, filled into urns and reburied.

Perhaps some might think that it’s scary or inauspicious to live in such close proximity to a cemetery. But such concerns do not exist in Queenstown residents who frequently walk through the cemetery as a shortcut to get to Commonwealth MRT. The cemetery has always been thought to be a very peaceful place.

The accompanying ancestral hall is made up of two buildings – Wu Fu Tang Ancestral Hall and Shuang Long Shan Memorial Hall. They stand as the oldest buildings in Queenstown. The caretaker is a welcoming and friendly uncle who is always pleased to tell you more stories about the cemetery’s history (unfortunately, he doesn’t speak any English).

Although the land’s 99-year lease is far from up and the caretaker seems rather assured that nothing will happen to the cemetery before 2065, there have been talks over the years of redevelopments by the Government. We don’t know when this place will give way to be redeveloped, so make a visit to this site of history before it’s too late.

After all the exploring, I bet your stomach’s rumbling. Hop over to Queensway Shopping Centre for a piping hot and aromatic bowl (or several bowls) of laksa. There are two stalls here within a stone’s throw away from one another – one being 328 Katong Laksa and the other being Janggut Laksa. Both claim to serve up the best laksa in Singapore.

Which is the best? There’s really no way to tell. Why don’t you be the judge?

Participate In The Queenstown Heritage Trail

There’s so much more to Queenstown than what’s been listed here, and one of the best ways to recount the story of our first satellite estate is to join the walking trail organised by My Community. The guided tour takes place on every last Sunday of the month and goes on for about three hours. Go beyond the typical tourist attractions and learn about our cultural history through Queenstown’s iconic landmarks and first-hand accounts of local residents.

3 Must Visit Destinations in India

Chasing Dreams: An Epic Journey Across the United States