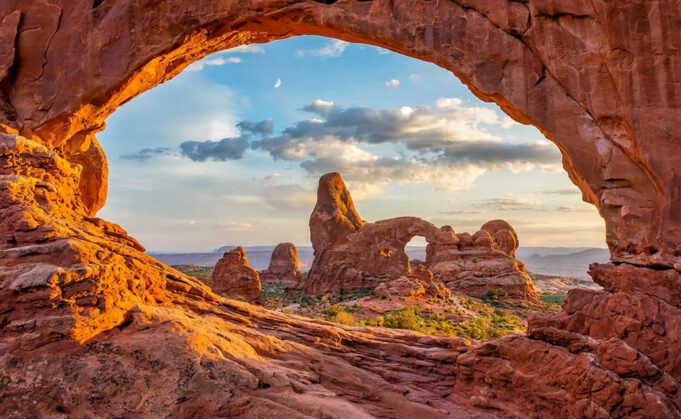 Separated by a state border but connected by raw and rugged desert landscapes, Utah and Arizona’s National Parks are ideal destinations for those who enjoy starlit nights, quiet solace and unforgettable experiences. In my opinion, Arizona and Utah are home to some of the most intriguing and brilliantly-colored areas in the world; the landscapes found in these states inspire creativity, freedom and an overwhelming sense of calm.

In November 2013, I took my first trip to the Southwest with one of my best friends, Ana Mestre. We ventured to the South Rim of the Grand Canyon, as well as Antelope Canyon, Monument Valley and Arches Park. The trip opened our eyes to the untamed beauty of the desert and it wasn’t long before I had the need to see it again. So with the company of my parents, I took another trip this past May 2015 to immerse myself in the beauty and spirituality of Bryce Canyon and the North Rim of the Grand Canyon.

I am not sure if it was because my travel companions, as well as myself, were all European, but we all shared the same impressions about the power of the parks in terms of perception of space. In the Grand Canyon especially, not only did we fail to grasp the depth of the panoramas, or the endless openness of space, but we could feel our own perspectives about ourselves change. We felt miniscule and helpless, and at the same time uplifted but the wonder around us.

With the exception of Antelope Canyon, we felt immersed in a more intimate atmosphere as we traveled across Arizona and Utah. In the parks, I felt fragile and unstable as if my self-confidence disappeared all at once and time had stopped. This sense of weakness was accompanied with a feeling of inspiration, freedom and lightness at the same time. To me the parks are spiritual environments. All of us loved the disconnection from home. We Europeans are used to seeing natural wonders in small spaces, where our minds and eyes can drink in their splendor at once. In Utah and Arizona, beauty is spread across such spacious landscapes and enormous distances that one’s eyes seem to get overwhelmed and become lost in the horizon.

This new experience was something that mesmerized us all. It made me think of something Edward Abbey wrote in his book Desert Solitaire: “It seems to me that the strangeness and wonder of existence are emphasized here, in the desert, by the comparative sparsity of the flora and fauna. The extreme clarity of the desert light is equaled by the extreme individualization of desert life forms. Love flowers best in openness and freedom.”

A Walk Through Utah

I will always associate Utah’s parks with geographic diversity. In Utah I was mesmerized by the mix of snaking canyons, soaring spires and fragile rock bridges, from the grandeur of the Grand Canyon to the narrow canyons and powerful walls of Zion National Park, from the the spiky hoodoos in Bryce Canyon to the multitude of sandstone arches in Arches Park. 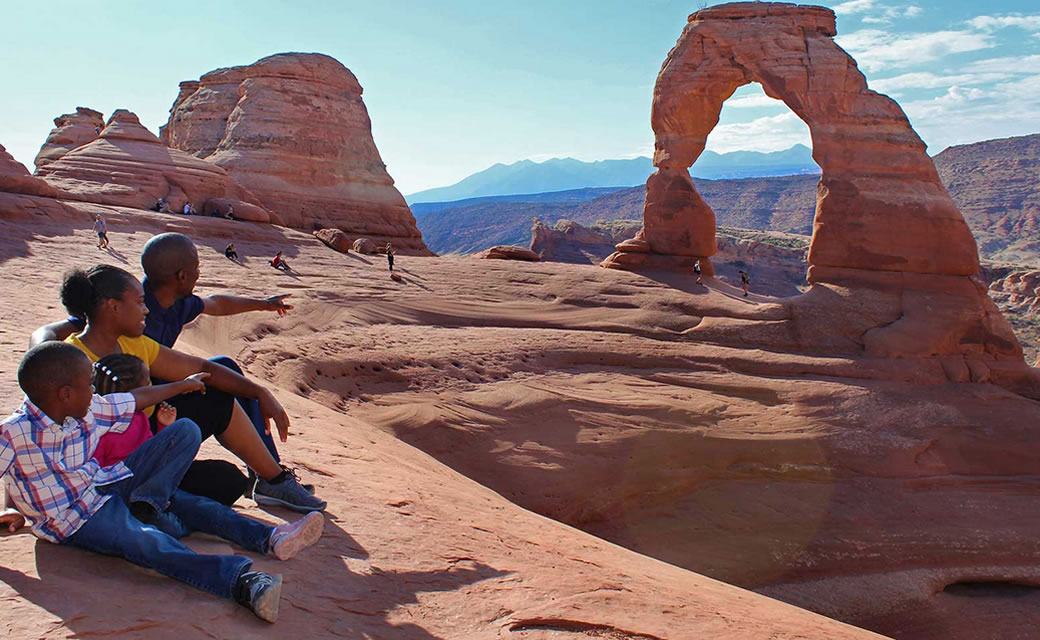 It was perplexing to see how nature has created perfect shapes. A millennium of wind, water and rain sculpted the arches, buttes and deep canyons that made the scenery so spectacular. With a car, Ana and I easily reached the main parking lots and hiked in. The most memorable hike was the one to Delicate Arch. The trail to the natural monument stretched out in front of us like something about to dissolve. Unique and unexpected, Delicate Arch made us feel as though we had to tiptoe and whisper to each other, otherwise we might cause it to fall over. Ana and I couldn’t believe such a delicate contour of stone could be so perfectly balanced, fragile and immovable at the same time. When the sunlight hit the red sandstone landscape, we felt we were in a photographer’s paradise. Delicate Arch was unique and unexpected. Paraphrasing Edward Abbey, it stimulated the senses and distracted the mind from everyday worries, reawakening awareness of the wonderful.

I hiked Bryce Canyon with my parents after having visited Zion Canyon. The immediate feeling was of being in a more intimate environment. Spaces were still vast and endless, but the hikes we did each day allowed us to walk among the typical skinny spires of rock – called hoodoos. These hoodoos were reminiscent of the whimsical sand castles I created in Italy when I was a child, only it was a giant, all encompassing version. Looking at them reminded me of how I would gently drop a mix of sand and water on the beach until little towers of swirls and curls formed.

My parents have hiked the Italian Alps and they admitted how this landscape seemed harsh in comparison. On the other hand, Bryce Canyon felt less remote and more welcoming than Zion Canyon or the Grand Canyon. I thought this feeling might have been because of its smaller, less overwhelming size. Shaped by wind, water and gravity, Bryce Canyon seemed to almost be in motion; with the undeniable erosion that had chipped away at its interior, the canyon was mysterious and almost grotesque.

I still remember the morning Ana and I woke up in Monument Valley. The window of our hotel room was open out to the valley, but when we woke up, we could only see fog. We quickly realized how lucky we were to have a fog shrouded morning as it unveiled little by little the isolated and giant red mesas, like curtains revealing a scene. At the end of the morning, the view was beyond description: buttes, sprawling sandy desert and surreal sandstone towers rose hundreds of feet into the air.

Monument Valley revealed to us not so much a valley or a wide flat plateau interrupted by crumbling formations, but more the domination of nature’s architecture. John Ford, who filmed westerns in this extraterrestrial place, called it the “most complete, beautiful and peaceful place on earth.” Indeed when I think about the magnificence of Monument Valley, I think of how it resembles every aspect of the iconic American Wild West.

Arizona for me is home to the true crown jewels of the national park system; Grand Canyon National Park, Antelope Canyon and Horseshoe Bend each have their own unique elements and impressions.

“The Grand Canyon is a sort of landscape Day of Judgment. It is not a show place, a beauty spot, but a revelation.” – J. B. Priestley
I like this quote because it perfectly describes what Ana and I felt when we first reached the South Rim and stared at the gorges of the Colorado Plateau. With piercing November air chilling our lungs, we stood and tried to make sense of the scene before us. How could a plateau and a canyon move together so seamlessly? How could a river make such an impression? The South and North rims were just edges, welds between incommensurate landscapes. The Colorado river seemed more a barrier, the sign of separation, than a conduit.

Although the rims were separated by about 20 miles, a five-hour road trip or 2-3 day hike was required to get between the two sides. The two rims had completely different atmospheres: the South Rim was more accessible, but it was also more touristy. I visited the North Rim in May, and it was pleasantly cool. Since it’s covered in trees, the North Rim has natural shade while the South Rim heats up dramatically during the summer months. The atmosphere at the North Rim is much more relaxing because so few people visit. There the emphasis is on relaxation and getting away from stress, rather than the attraction of the canyon. That`s why this part of the Canyon is my favorite.

The contrast between the Grand Canyon and other landscapes was profound. Unlike a mountain’s flank, the Canyon’s rim was defined with a geologic razor, and within its borders the Canyon is completely contained. I felt like I was not prepared for what I was about to experience and no amount of IMAX movies or coffee table books could have prepared me. The Grand Canyon came as a surprise, as a phenomenon with an aesthetic impact, without precedent.

Both times I visited it, I felt a profound sadness leaving the Grand Canyon. I realized it is a place you could look at forever and never see the same canyon twice. The layers of red, green, cream and black are ever changing. Take a step, and the vista changes. Let the sun move a bit, or the clouds, and you have a whole new canyon.

This masterpiece of color is made up of two slot canyons. The Navajo name for Upper Antelope Canyon is Tsé bighánílíní, which means, “the place where water runs through rock.” It is home to glorious shafts of sunlight. Lower Antelope Canyon, the one I visited with Ana, is Hasdeztwazi, which in Navajo means, “spiral rock arches.” Mysterious and magnificent, Lower Antelope Canyon is a photographic extravaganza due to the erosion of the sandstone by water. A camouflaging masterpiece of color variations, sunbeams and visible textures made this place the most beautiful spot I have seen.

Lower Antelope Canyon is spiritual. Red rock walls rise upward like praying hands, like we had entered a sacred space. As if we were in a cathedral, we felt a sense of respect and protection and we left with an uplifted feeling that we had been given a gift from nature, something greater than ourselves.

Lower Antelope Canyon was to me a romantic experience as well. The orange, pink, red and brown curls and swirls made it seem warm and almost sensual. Each smooth curve had been created over many thousands of years by the relentless forces of water and wind, slowly carving and sculpting the sandstone into forms, textures, and shapes that made it seem so intimate. The views in Lower Antelope Canyon changed constantly as the sun moved across the sky, filtering light softly across the stone walls. It was as if we had stumbled into a sandstone dream.

There’s nothing man-made about Horseshoe Bend, but it certainly looks like something humans would try to mimic. We got to the powdery edge of the trail after a 20 minute walk from the parking lot, and what we saw at the end of the trail made us gasp. The sun was setting and as we watched, we couldn’t bring ourselves to disturb the silence around us. Aqua blue and green waters swirled below us as they meandered around a giant rock formation. The Colorado River didn’t say anything. It was completely passive, acted upon but never acting. It just lay there, inviting contemplation from those above.

Utah and Arizona’s national parks cannot be possessed. We fool ourselves if we think these inanimate objects care about us. The boundless spaces protected in these regions inspire respect. Their depth and quietness allow for natural magnificence, where so much of it has disappeared. What we learned at these places was that embedded in the strata of such conformations is immutable evidence that life changes and leaves memories; that we humans are transitory beings and we should admire and enjoy beauty now, before our bodies and minds can no longer bear it.

A Weekend in St. Petersburg, Florida

What are the Benefits of Over 80 Travel Insurance?

9 Things I Learnt From Living in Bali

A Journey to Gabon, Central Africa’s most Friendly Destination