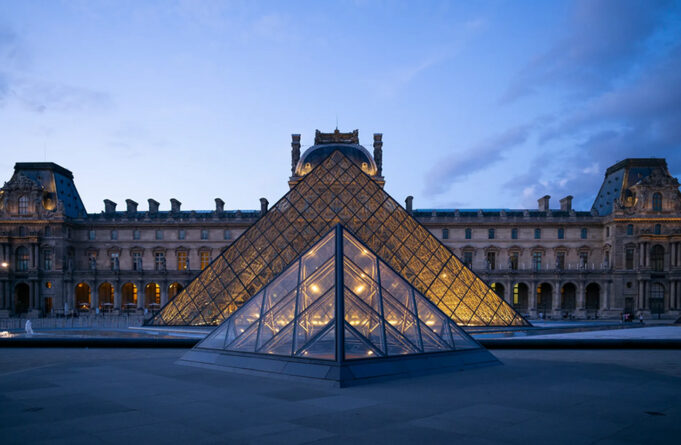 Located on the Right Bank of the Seine in Paris, the Louvre is one of the World’s most famous and iconic buildings. It is also one of the largest and most popular museums, with over 35,000 exhibits in a space of 652,300 square feet and more than 8 million visitors a year. Despite the large number of exhibits and the subjective nature of art, we have compiled a list of 10 pieces that we think no visitor to the Louvre can afford to miss.

The Mona Lisa
This painting by Leonardo Da Vinci is one of the main reasons that most people decide to visit the Louvre and it is worth seeing. If you can choose a time to avoid some of the crowds, this means that you will be able to see this masterpiece in all its glory.

Venus de Milo
This famous Greek sculpture is thought to be of the Greek Goddess Aphrodite and is on permanent display at the Louvre. The arms of the sculpture were lost when it was discovered and it is well known for this feature.

Akhenaton and Nefertiti
This statute of the pharaoh Akhenaton and his wife Nefertiti was sculpted over 3,000 years ago and is well worth seeing for the fact that many other images of the Pharaoh were destroyed by subsequent Pharaohs.

The Winged Victory of Samothrace
Also known as the Nike of Samothrace, this huge sculpture to celebrate the goddess Nike as well as to honour a sea battle is beautiful. It is over 2000 years old and well worth a look.

Islamic Art Collections
The new galleries of Islamic Art show off the Louvre’s collection perfectly and cover thirteen centuries as well as three continents. The galleries have over 14,000 objects on display, covering arts and exhibits from Islamic lands.

Psyche Revived by Cupid’s Kiss
This 1787 sculpture by Antonio Canava has been on display in the Louvre since 1824 and is a fine example of classical sculpture, depicting the lifeless Psyche being awakened by a kiss from the god Cupid.

Dutch Artists
The Louvre contains many works by such great Dutch painters as Vermeer and Rembrandt and the sections featuring work from the 17th and 19th centuries is worth a visit.

Virgin of the Rocks
This painting by Leonardo da Vinci, also know as Madonna of the Rocks, is one of two paintings with the same name which are almost identical. The other hangs in the National Gallery in London. The painting depicts the Madonna and Christ child with an infant John the Baptist and is a great example of da Vinci’s work.

The Raft of the Medusa
This large oil painting from 1818/1819 by French painter and lithographer Thhodore GGricault is iconic in French Romaticism and worth seeing. The painting depicts the aftermath of the wreck of the French vessel Medusa, which ran aground in 1816 and should be viewed as much for its depiction of a historical event as for its merits as a work of art.

The Coronation of Napoleon
This huge painting by Jacques-Louis David from 1807 is huge and beautifully depicts the coronation of Napoleon at Notre Dame.
It would be impossible to see everything on one visit to the Louvre, so while this is our list of the top 10 things you cannot afford to miss, if you decide to visit the Louvre, you will then be able to make your own list of ‘must see’ exhibits. That way you will be able to keep going back again and again.

A Guide to Lombok

Our Experience of Pattaya Beach and іn the City оf Fun, Sin & Nature

Belgium – Flanders With the Bicycle and Ship

6 Tips and Tricks for Hiking the Inca Trail

6 Things You Should have in a Hiking Kit