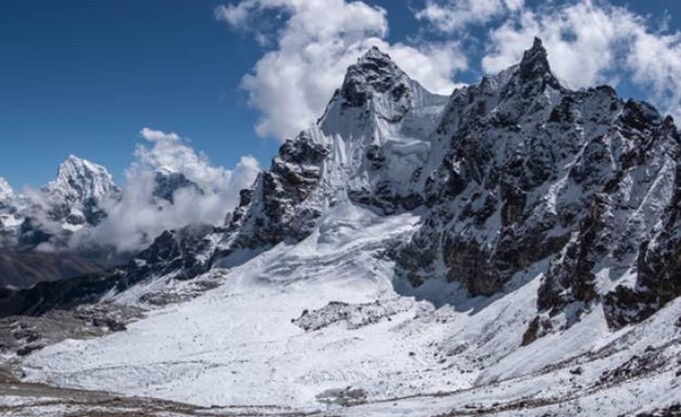 If you’re keen to trek to Everest Base Camp but are wondering if there’s a way to do so without following crowds of other trekkers you’re in luck! There are indeed routes that deviate from the standard trail and the hike via the Gokyo Lakes is probably the most picturesque.

How does the Gokyo trail differ?

The main difference between the normal Everest Base Camp trek and the trail that leads you there via Gokyo is the length – you’ll need to allow 21 days for a trip to the Gokyo Lakes and Everest, while the standard route typically takes 17 days.

Not significantly longer, granted, but the extra few days of walking will lead you past some of the most spectacular and unspoilt scenery in Nepal, making it more than worthwhile. You’ll actually follow the beginning of the main Everest trail – as far as Namche Bazaar – and you’ll still get to ascend Kala Patar for amazing views of the world’s highest peak, as well, of course, as visiting the Base Camp.

Gokyo and its lakes

One of the highlights of your holiday in Nepal will undoubtedly be exploring the Gokyo Valley and its lakes. You’ll see the first of these bodies of water after you leave Machermo – one of your acclimatisation stops – and head towards the valley. You’ll climb to over 4,000 m, as you hike to the top of the Ngozumba Glacier, from where you’ll see the first small glacial lake.

Next, you’ll pass Taboche Tsho, another of the Gokyo Valley lakes, but it is Dudh Pokhari lake – which is near Gokyo itself – that is truly breathtaking. The water here is a deep emerald colour, making it really stand out from the grey of the rocks and the white of the snow-capped peaks.

The most spectacular views you’ll get of the mountains during your trip will be from Gokyo Ri and Kala Patar. The latter is a famous vantage point from where to see Everest in all its glory, but Gokyo Ri can rival its panoramas. At 5,360 m, Gokyo Ri is slightly smaller than Kala Patar (which stands at 5,545 m), however, from the top of the former you’ll be able to see Everest, Makalu and Lhotse, as well as the Ngozumba Glacier and the lakes – an impressive array of sights.

Of course, Kala Patar is famous for good reason, so tackling the ascent is a must on any Base Camp trek. As well as Everest, you can see the summits of Lhotse, Ama Dablam, Changtse and Nuptse from the top – it’s hard to describe just how stunning these views are.

One of the great things about the route via the Gokyo Lakes is that there are several challenging sections to it – we’ve already mentioned Gokyo Ri and Kala Patar, so now it’s time to talk about the Cho La pass.

This is one of two passes that leads out of the Gokyo Valley and it reaches 5,420 m at its highest point. The track here is steep in places and it can require a bit of scrambling to get through the boulder field. The upper sections are permanently covered by ice and between November and January, snow regularly falls here. From the top, you’ll be able to look back over the Gokyo Valley and will have a great view of Ama Dablam.

Things Not to Do when Renting a Car in Rwanda

What are the Benefits of Over 80 Travel Insurance?