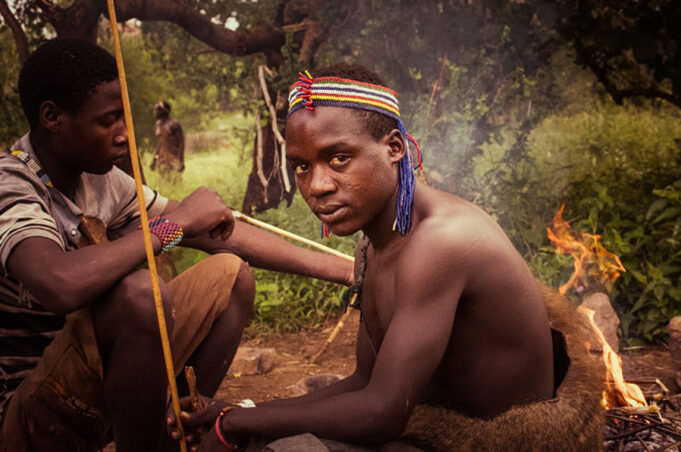 Spending time in rural Africa is an experience that everyone should take, but only if they are ready to listen and really meet the people. Our guest writer Ken Firestone has spent years meeting different communities in Kenya, Tanzania, Rwanda and other countries and has learned valuable lessons along the way. In this Op-Ed, Dr. Firestone describes a few of his experiences and the importance of leaving expectations at home and taking the time to listen.

I was once invited by a group of tribal hunters to sit with them as they lounged under a giant baobab tree. Not looking carefully at what I was doing, I accidentally sat in a lit fire that had been covered in ashes. I jumped up and out of the fire and the hunters roared with laughter. When I realized what I had done, I began laughing right along with them. They weren’t laughing at me, but at the hilarity of a person unwittingly sitting in an open fire pit. There are certain human experiences that transcend culture and melt two worlds into one, if only for a moment. This was one of them. Such universally shared experiences often connect people from radically different cultural backgrounds and are the building blocks to creating lasting and beneficial experiences between locals and visitors.

Keeping cultural visits “real” means not over managing the visitors’ experience. When guests and hosts find shared meanings, a cultural bridge is crossed and a connection is made. These unanticipated moments are what make immersive cultural visits meaningful for both guests and hosts, but building this kind of foundation is often more of an art than a science.

I confess, my initial attraction to bush peoples began with a romantic illusion. I thought, “Wow, what a beautiful and peaceful simple life, uncluttered by modern technologies.” I wanted to reject the “modern” way of life that was sterile, artificial and organized by impersonal bureaucracies that disconnect “man from land.”

Since my early years of traveling through rural parts of Africa, my naiveté has given way to sobering realizations. In East Africa, I listened to the stories told by the  Hadzabe  hunters in Tanzania’s Rift Valley about their children dying at a young age because their malnourished bodies couldn’t fight off malaria. Maasai pastoralists shared how their land had become overgrazed and they could no longer support their large families. The Samburu and Turkana pastoralists living on the northern Kenyan frontier suffered from drought caused by global warming. The Batwa Pygmy (Twa) bushmen fled violence in the Congo and were forced to live in exile in western Uganda. They told how they lacked skills outside of hunting and gathering. Without the rights to enter Uganda’s Semuliki Forest nearby to hunt or cut down a single tree for firewood, their only form of sustenance was the money made from selling handmade trinkets to tourists.

The more time I spend with these communities, the more I understand the trials and tribulations they faced. Because of this, I now travel at a slower pace. I don’t want to just see the colorful outer veneer of remote cultures I used to be enamored with. I want to peek beneath the veil of their outer lives to see the more private aspects without being intrusive. I want them to be comfortable enough with me to invite me into their sacred times and spaces. I want the money I spend to go toward helping them achieve their goals. I want to step off the paved path of typical tourism and venture into the wonders beyond.

Caption: “After spending large quantities of time with rural communities, I no longer use the term “illiterate” when referring to a person who can neither read nor write. This term usually suggests a pejorative reference about the intelligence of the person or people referred to.  If it implies a lack of intelligence, I would be viewed as extremely “illiterate” to the bush peoples that have an encyclopedic knowledge of their natural environment and how to survive within it. I am only “literate” in a culture that requires proficient reading and writing skills to survive. Some of the deepest wisdom I have learned has been the result of spending time with peoples who don’t have any use for the written word.” – Dr. Ken Firestone.

Encouraging visitors to get out of their heads and listen to the people they meet is something I try to do on every trip I lead. I want visitors to experience the bush peoples’ daily lives with dancing, chanting, trying new foods and asking questions. Sitting around communal campfires, I want visitors to learn basic hunting techniques, understand how communities have adapted to harsh surroundings and hear ancient stories.

One day during a trip in Tanzania’s Rift Valley, I was relaxing with the bushmen around one of their ever present campfires. The men around me were sharing stories and laughing about hunting experiences, when we  suddenly heard the screech of a baboon in the nearby forest. Ever man in the circle leapt from the ground, grabbed his bow and arrows (always kept at arms length), and in a flash, dashed off into the bush with his dogs. By the time I mobilized myself to follow them, they had already disappeared into the thorny acacia thicket. They came back a half hour later laughing and smiling and holding a dead baboon with an arrow through its neck. They gave it to the women to skin and prepare for the communal meal later that day. Then the men sat back down on the ground just as before and continued as if nothing had happened.

When done correctly, cultural tourism is not like other forms of tourism. Apart from the financial compensation that the local communities gain from allowing visitors into their homes, both parties take advantage of learning from one another. Interacting with local peoples and cultures takes tourism outside the control of the usual “agents of tourism,” the middlemen who constrain tourists’ movements and shape their experiences, and gives it back to the unpredictable and exciting reality that is life in the bush.

Exploring the Swahili Paradise of Tanzania!

Top 5 Places To Visit As A Travel Couple