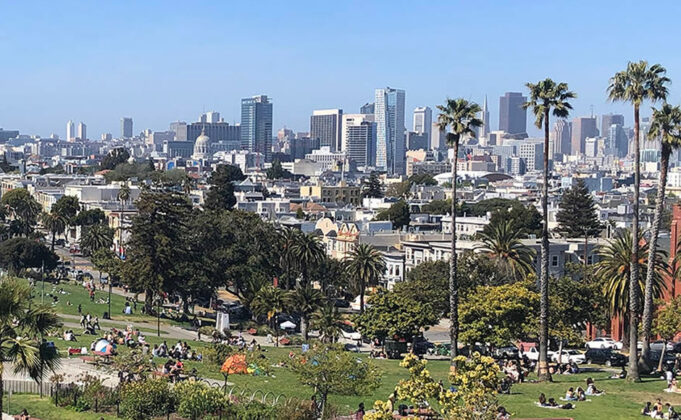 San Francisco’s streets are so very drenched in culture that each year it attracts approximately 16 million visitors. Those iconic downhill dips and ramps of the long expansive roads, as Steve McQueen roars past to a melody of sirens, in a flashback to 1968′s groundbreaking chase movie, Bullitt. But what is it that can make a holiday there, especially for the more culture-hungry visitor? You’ll be glad to know that the Golden Gate city has much more to offer than what it displays on its foggy surface.

San Francisco is a bijou yet picturesque city overlooking a stunning bay. The weather is cool and crisp, not great for people who prefer warmer climes; however microclimates mean that the east of the city is warmer than the west. This cultured and cosmopolitan city bears the echoes of some of America’s most exciting eras and movements. You can see – and ride in – cable cars, gliding serenely up Nob Hill, which opens onto the popular shopping Mecca of Union Square. This shopper’s paradise is a place where you can buy anything from exquisite antique china to a sheer t-shirt from a high street retailer.

The San Francisco bay is spanned by one of the Modern Wonders of the world – the Golden Gate suspension bridge. Walking or cycling is the best way to visit, with reserved times for each throughout the day, but be aware that pedestrians are banned from the Pacific facing side of the bridge. You can also try a bus tour of San Francisco’s landmarks. Alcatraz also overlooks the bay and is a National Historic Landmark. This beautiful island, populated by charming wildlife, is home to the now abandoned Alcatraz prison; which became notorious due to its isolated location and desperate escape attempts, as well as hosting inmates from Al Capone to Robert Stroud. Entrance to the prison is free, but the ferry trip costs; however it includes a guided tour of the island with first person narration from former prisoners.

The City Lights Bookstore is a must see destination for literary tourists – and the main reason I’m going to San Francisco. City Lights have published books (including the Pocket Poets series) as well as selling literature. The company originally published Howl by Allen Ginsberg; the resulting obscenity trial revolutionised freedom of speech in the USA, enabling the publication of works hitherto deemed appallingly immoral. Nowadays, they put on a few readings a week and no holiday would be complete without attending one.  It embodies the culture, passion and liberal politics that makes San Fran one of the best places to live in America. The Castro Fair is on every October, and well worth the trip by itself. If you have a further taste for culture, the Marrakech Magic Theater features a range of fantastic magic and comedy shows, complemented by a delicious menu and a selection of exotic cocktails.

A Weekend in St. Petersburg, Florida

A Tribute to Utah and Arizona’s National Parks

4 Ways to Enjoy a Family Holiday in Europe