Home Experiences Top 7 Bizarre Local Dishes You Have to Try! 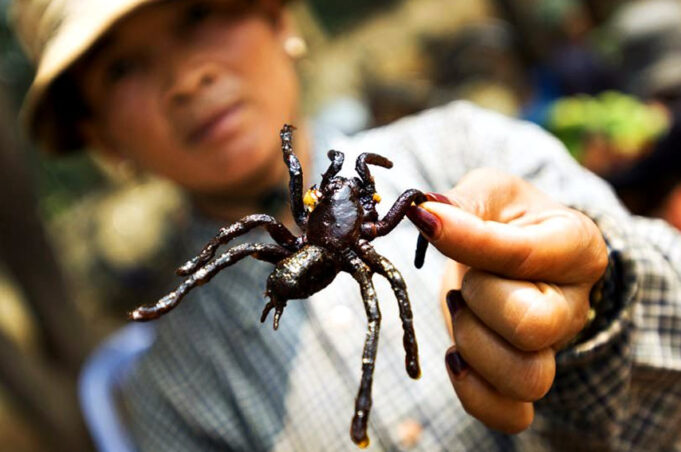 If you are planning any city breaks this year there are many local delicacies for you to try. Some are not for the faint hearted and some can be dangerous if not prepared correctly. Here are 7 bizarre local dishes you simply must try if you are ever in the region: 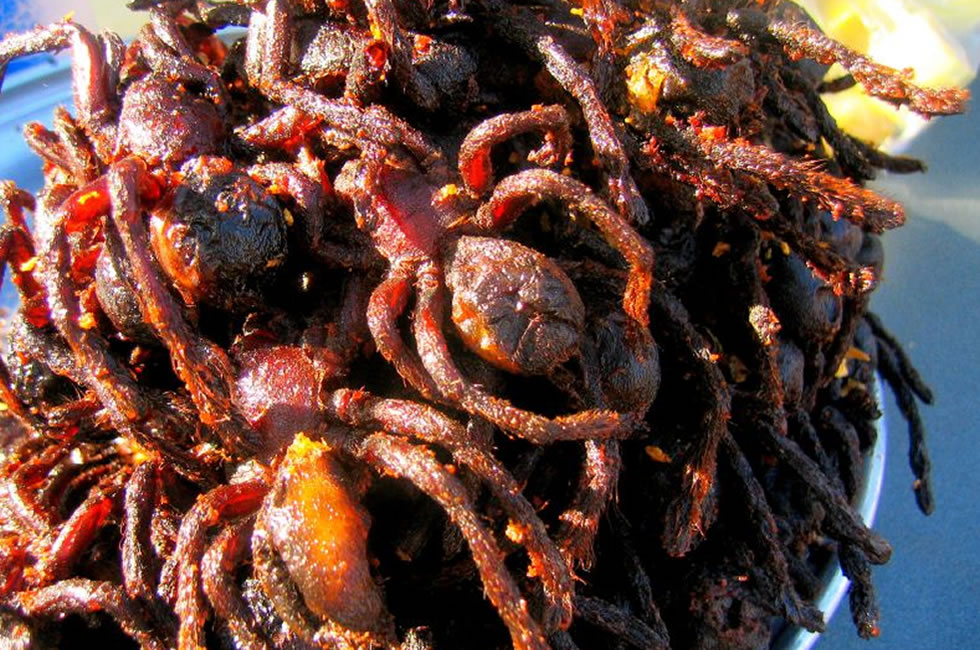 Fried tarantulas, commonly called ‘a-ping’ by locals, are considered a delicacy in Cambodia. The tarantulas are bred in holes or hunted in forests and then deep-fried in oil. The history of the fried tarantula is unknown; however, it is believed that the practice of frying and eating tarantulas became popular when food became in short supply under the rule of Khmer Rouge.

The fried tarantula can be commonly purchased in the Cambodian market town of Skuon, which is sometimes known in the local language as ‘spiderville’, for a few cents. There has certainly been a rise in popularity of this dish since the early 1990’s when tourists passing through, stopped along the way to try this local delicacy. 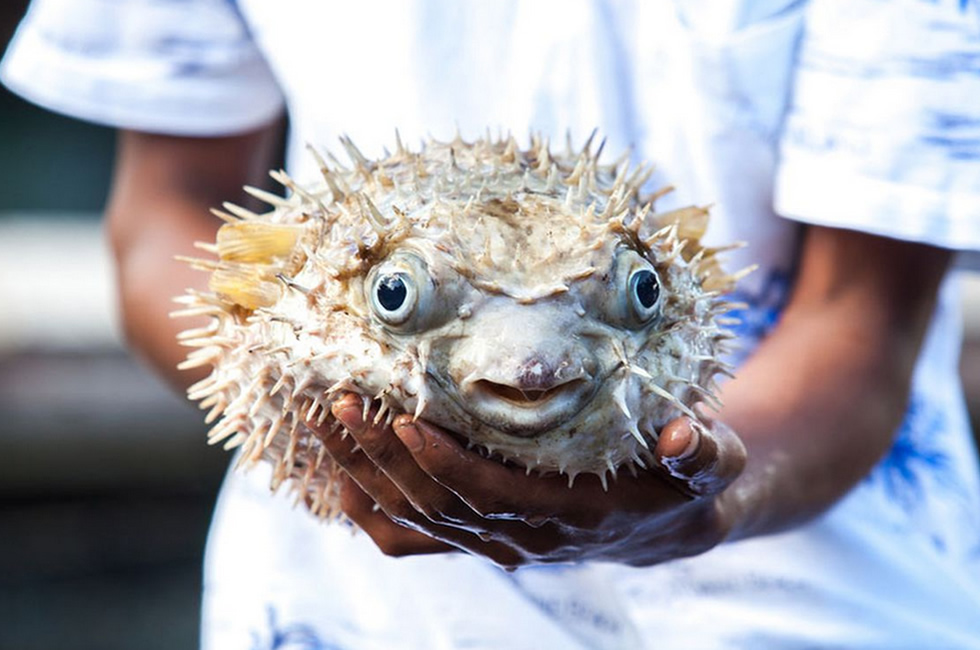 This potentially dangerous dish hails from Japan. The rules for restaurants able to sell this dish are very strict, with the chef preparing the meal needing a licence. This is because the puffer fish contains lethal amounts of poison tetrodotoxin, especially in the liver, ovaries and skin. It is illegal in Japan to sell the liver in restaurants and has been since 1984.

If you are attempting to try this dish, then ensure you visit a restaurant where the chef has a licence to prepare and sell this delicacy. It’s certainly not for the faint-hearted! 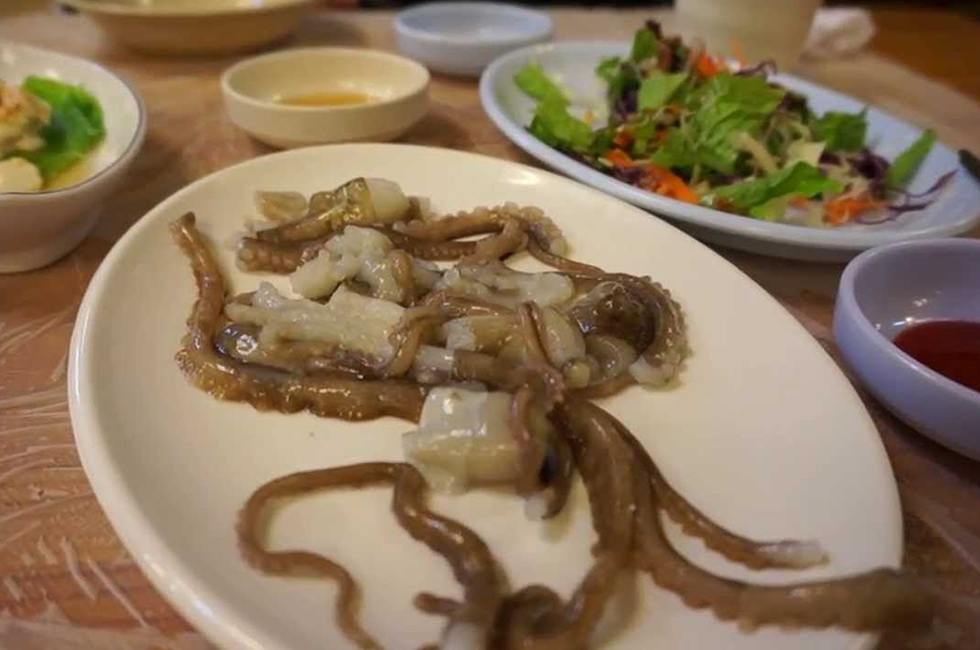 Sannakji is a raw fish dish found in Korea. It consists of a live baby octopus, which is cut into small pieces and lightly seasoned with sesame and sesame oil. The suction cup pieces of the octopus are still live when this dish is served and therefore this means that the tentacle could stick to your mouth/throat. Care must be taken to chew thoroughly as there is a risk of suffocation if the suction cup becomes attached to the throat.

The name ‘Rocky Mountain Oysters’ leads you into a false sense of security. If you were expecting oysters of some kind then you will be sadly disappointed. Instead, what you get is a common appetiser made of bull calf testicles.

Rocky Mountain Oysters are often peeled, coated in flour, pepper and salt and then deep fried. This delicacy is common amongst ranching areas of America and Canada.

If you are planning any hotel breaks in the UK, be sure to try this delicacy in Wales. The name is misleading however, as Laver Bread is not a type of bread at all. Rather it is seaweed! It is boiled and then pureed or minced producing a mushy accompaniment for bacon, lamb or mutton. It is said to be very good for you, containing many vitamins that make up your daily allowance.

A traditional Sardinian cheese made from sheep milk, this dish doesn’t sound too unusual… That is until you realise that it contains live insect larvae. The larvae are created using a deliberate infestation produced from the “cheese fly”.

The larvae are translucent and are able to jump approximately 6 inches in the air. Despite it’s Sardinian origin, the country has actually ruled the cheese illegal as the larvae can cause an infestation of the intestine, causing severe illnesses that can result in fatality.

Balut is a boiled, fertilised duck embryo, which is eaten in the shell. It is a popular dish in parts of Asia and is commonly sold as street food in the Philippines and Vietnam.

Balut is commonly served with salt, garlic and pepper. The whole egg can be consumed allowing the palette a range of textures and tastes. The age of the chick is dependent on what area you visit. Some provinces prefer the gestation of around 17 days where the beak and claws are not visible, whilst others prefer the gestation of around 21 days, when the chick will be firm but tender when cooked.

It is certainly true that wherever you go in the world there will always be an out of the ordinary delicacy or two to take you out of your comfort zone and something interesting to experiment with when it comes to food. Be sure to educate yourself on the background of the food and ensure that any place you visit has a chef who is fully trained in the art of delivering your meal to you, which is safe to consume. Happy tasting!

Where to Spend Christmas: Best 5 Places in Africa

The Ultimate Road Trip Along Route 62