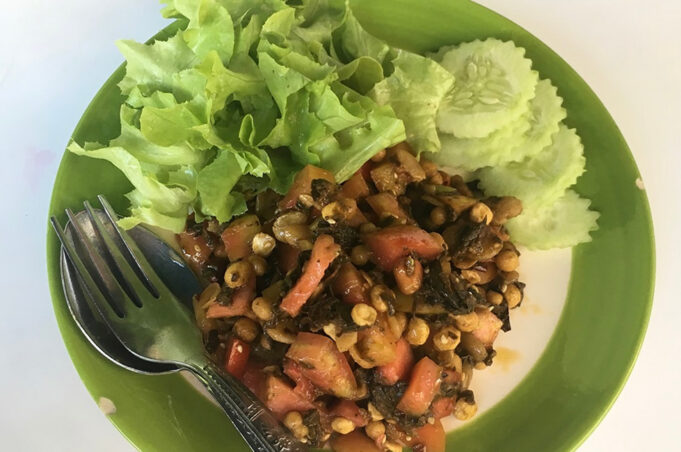 In the Nimman area of Chiang Mai, an area known for it’s relaxed vibe and good eateries, the restaurant “The Burmese” has become something of an institution.

I was first taken to this tasty place by a friend who knew the restaurant well, only to later discover that the modest, street-food style place is renowned throughout the city for its Tea-Leaf salad and Biryani. “The Burmese” or “Nong Bee” to give the restaurant its proper name (not that anyone calls it that), is an informal, street-food type setup. Visitors are always surrounded by plenty of fellow diners from all different corners of the world. My personal favorite spot to sit is outside, right in front of the food preparation area: it affords the best view of all the cooking! The “boss” of Nong Bee is a very tall Burmese lady who presides over the stove all day and greets all her repeat customers with a friendly smile. The restaurant itself is very informal – guests help themselves to menus and drinks before chatting to the waiters and placing their order.  The Biryani may or may not be available (I hear Sundays are the day to go), and patrons rarely pay more than 100 Baht ($2.80) for a meal for two.

Myanmar is one of the only countries in the world that eats – as well as drinks – its tea. The Tea Leaf salad, known in Myanmar as “Lahpet thoke” is made of fermented tea leaves, diced tomatoes, peanuts, peanut oil and spices. It’s not entirely a vegetarian dish as fish sauce and/or shrimp powder are usually added. For the full recipe, see below. Nong Bee’s roaring trade in this area of Chiang Mai is not entirely surprising. The restaurant is run by immigrants from the Shan and Karen states in Northern Myanmar. Thailand’s largest immigrant population (about 1.4 million people) is from Myanmar. Many newcomers make Chiang Mai their home because of close proximity, economic opportunities, and a similar climate to Northern Myanmar. After asking one of the waiters how he likes Chiang Mai, he told me, “I’ve been here 12 years, but I can’t wait to go home. I hope to go home to my country next year.” The main reason that so many Burmese have come to Thailand over recent decades is to escape from political and social repression in Myanmar, combined with the prospect of making a better living in economically stable Thailand. The Burmese – Photo by Ellie Cleary​

Beyond the overwhelming immigration figures, there are individuals who are “unofficially” in Thailand—those who are often victims of human trafficking and end up stateless or as citizens of Long Neck tourist camps just outside of Chiang Mai. Regardless of the status of Burmese immigrants in Thailand (and the official refugee policy is, shall we say… “fluid”), very few Burmese people have access to education and health services. Burmese immigrants in Thailand are not given Thai status; therefore, they also cannot apply for Thai passports or citizenship. Across the street from Nong Bee’s, on Soi 13 of Nimmanhaemin Road, is the Chiang Mai Burma study center. The study center develops education and social welfare projects to support Burmese youth in Chiang Mai, and is a not-for-profit organisation. It offers lessons in various subjects to build on local education, as well as a community library. It also hosts events and discussions on key cultural topics. The center is open daily and is worth a look for visitors to see the good work that is being done. Nong Bee Burmese Restaurant can be found in the Nimman area of Chiang Mai, on the corner of Nimmanhaemin Road and Soi 8.

Create your own Tea Leaf Salad

Simply mix all the ingredients together and serve in two portions, garnish with your preferred options listed above, such as cilantro, cucumber and lettuce. Enjoy with steamed rice for a more substantial meal.

Living a Champagne Life on a Beer Budget

Visiting the Louvre? 10 Pieces You Really Can’t Afford to Miss

6 of the Best Gap Years

6 Things You Should have in a Hiking Kit

Top 10 Places to Visit in Kerala, God’s Own Country