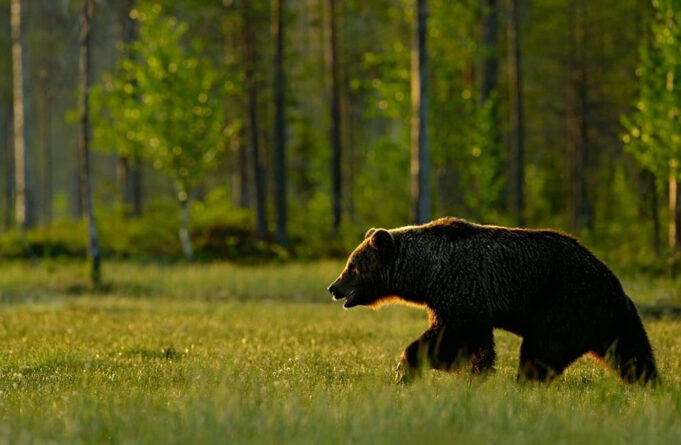 Mary Derriman from Nature Trek tells us about her escapade.

Have you ever wanted to see real live bears living their lives in the wild woods? I found something that offered just that: a trip to Sweden.

Our small party of six left the airport climbed into the minivan belonging to Hakan our host. We had a 3-hour drive north. From the time we left the town the countryside appeared to be an endless forest of pine and birch. This was real wilderness. We even saw a wild moose, but very little traffic.

We arrived at the lakeside lodge to find that, although it was still sunny, there was a cold north wind blowing down the lake. There was a wood fire burning in the stove in our lodge but we had to go over to the main building for a delicious, candle lit dinner of reindeer meat. This was to be a real wilderness experience: there was no electricity or mains water, and the drinking water came from a natural spring.

On the Tuesday morning, after a quick wash and a trip to the loo across the grass, we walked in the woods round the lodge looking at the local birds including a pair of cranes by the water’s edge and a camera-shy black woodpecker. It was colder than expected.

In the afternoon we set out for the bear hide. In deference to my 80 years we drove as far as possible, but eventually we had to don our wellie boots and take a moose trail through mossy boggy bits and over roots and fallen trees.

We settled into the hide, which was well covered with camouflage net. We had arrived early so as not to disturb the wildlife. Hakan had been up previously to set out food for the bears in a trough, or as he called it ‘a coffin made of logs’, which was covered with a net to keep off the marauding ravens. After several cups of tea and a cold collation we retired to our bunks, while Hakan kept watch.

At dawn we were up again scanning the glade with binoculars. The ravens came, as well as the foxes, and we even a spotted woodpecker … but still no bears. To our dismay it started to snow. Eventually we trekked back down to the lodge to put on more of our summer clothes and eat another delicious meal. This time it was local salmon.

It was not really a day for bird watching in the woods, so Marge, Gemma and I opted to return to the hide and leave the men to their own devices. After another delicious lunch, this time of moose, Hakan handed us over to a friend. The young man was optimistic. ‘Yes we would see bears. Maybe three.’ However the evening proved to be no better bear-wise than the last.

When we got up early to renew the vigil, there was still nothing new, so we had breakfast and mugs of tea resigning ourselves to failure, when Gemma whispered, ‘There’s a bear!’ And there, out of the forest, came a large, almost black, bear. He stopped and looked at the hide then turned and hurried away. Talk about eleventh hour but we had seen him and were triumphant!

We made our way back to the lodge to tell the others and to enjoy another of Eva’s Cordon Bleu meals, before packing for our return to the airport. I didn’t have much to do as I was wearing all the clothes that I had brought. We said goodbye to Eva and the two dogs and set off in the minibus. It was not until we were well on our way that I suddenly realised that, as we had only worn night things the first night, mine were still under my pillow. All three of us had done the same and we burst out laughing, completely mystifying the men, but Hakan kindly said that he would send them on to us. He also told us why he thought we had not seen more bears. Apparently ‘our’ bear was a newcomer and did not know that a welcome feast awaited him at the hide; the local bears were afraid to approach when he was around. On the way back we stopped at a moose sanctuary where orphan calves were looked after if their mothers were killed on the roads. The high fences were more to keep out bears and wolves than to keep the moose in. We were lucky enough to see two calves, which had been born the day before.

At the airport we said goodbye to Hakan and his beautiful country.

Exploring Davao on a Budget

Get Ready to Pitch Your Tent