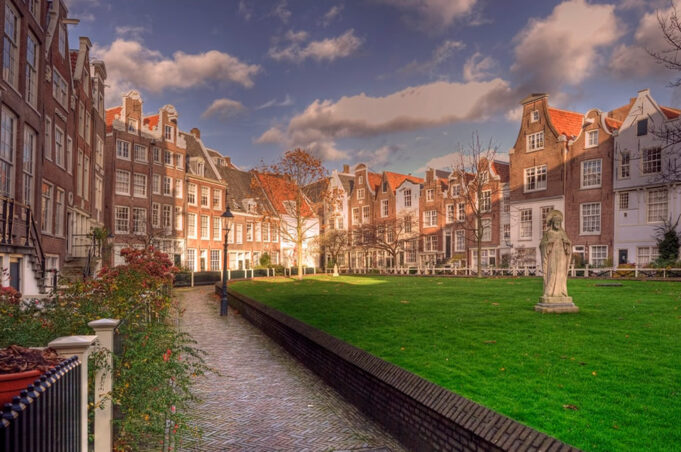 Yes Amsterdam may be filled with endless intoxicated fun, but behind the smoke and lights of Red Light District, there are many interesting places to visit in the capital. Many of you tourists travel to be a part of an experience—an experience that you can’t find where you live. And that is what I am here to tell you about: Begijnhof.

Amsterdam has many hidden corners that a lot of people miss when visiting the beautiful city. They tend to concentrate on the obvious museums and parks—little do they know that the real adventure lies in one of the oldest inner courts of Amsterdam. Begijnhof is made up of small buildings surrounded by heart-warming array of green luxury. It lies in the innermost canal of the circular canal system, so you may come across it—but be aware, the entrance is a mere door. To make things even more mysterious, Begijnhof is a meter lower than the rest of the city, often known as medieval street level.

During the 13th and 14th centuries, Begijnhof was home to the religious communities called Beguards and Beguins. They lived on a loose semi-monastic community without formal vows, but quickly declined by the 1600’s. What makes their home Begijnhof so interesting is how a resort remains so calm in a busy city such as Amsterdam. Filled with peace and tranquillity, the thoroughly thought out design of houses, churches, and gates provides an intriguing history to the mysterious location.

The Begijnhof was originally entirely encircled by the Nieuwezijds Voorburgwal, the Spui, and the Begijnensloot—bodies of water that once existed throughout Amsterdam. The only entrance was at the Begijnensloot connected by a bridge. You may have guessed it already, but the current day Begijnhof preserves the secrecy of the location by only opening certain areas to tourists. Don’t be put off though, revisiting a place of legend in today’s day is still an exciting experience. Be wary of the residents as some of them still live at the Begijnhof—photo taking should be kept to a minimum.

Begijnhof is just one of the many places you can visit in Amsterdam that promises to be a story for years to come. What’s keeping you from coming, then? Find a hotel in Amsterdam and explore the hidden depths of the ancient and historical city!

When Sohaib isn’t backpacking around Europe you’ll find him writing travel tips and reviewing the best and worst London hotels.

Exploring the Swahili Paradise of Tanzania!

Brazil Holidays: Not a Time to Lose Weight