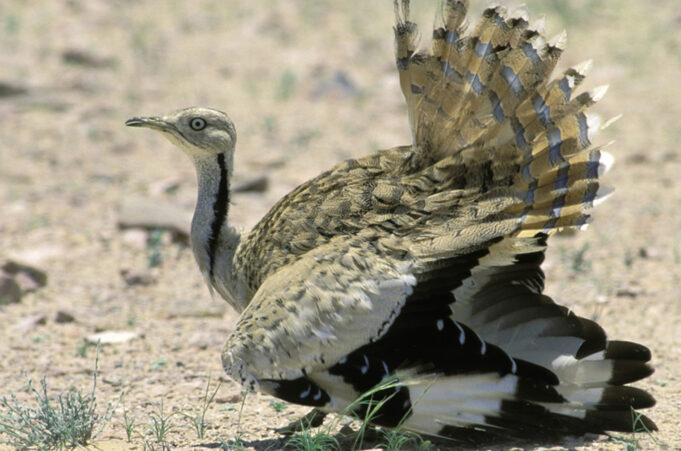 Fuerteventura was given the status of a Biosphere Reserve by UNESCO in May 2009. The coastline in the east consists of 326 km of long beaches, low cliffs and sand dunes. The wetlands and sand dunes are where you will find many rare species of plants and birds.

The western coast consists of more than 100 km of cliffs and beaches, which are virtually untouched by man. The interior has the largest area of extensive dry steppe in the Canary Islands and is the home of rare birds – like the Egyptian Vulture, Houbara Bustard and the Canary Islands Chat.

All the mammals that are on this island were introduced accidentally. Shepherds and their flocks can often be seen in the hills and on the plains. The goat meat and milk that is produced here is said to be the best of the Canaries. The main reason is that the animals feed on the lichens, wild grasses, and aromatic herbs that grow wild here. Feral donkeys and goats can be seen roaming freely in some of the remote parts of west coast of the island.

There are a total of thirteen natural protected areas and parks on this island. This means that almost 50 percent of the total land area is protected. Plans are being made to create a National Park along the west coast. This is the very same beaches where loggerhead and leatherback turtles used to come to lay their eggs.

The Environmental Agency of Fuerteventura would like to reintroduce turtles to the west coast. Loggerhead turtle eggs are now being brought in each year from the Cape Verde Islands to Cofete beach, where they can lay their eggs in artificial nests on the beach. The hatchlings are then kept in special tanks for around two years before being released. It is hoped that female loggerheads will return to the beaches to lay their eggs again, but this is only estimated to occur in about ten years from now.

The island rises from the sea bottom, which is almost 1 km deep just off the coast. The nutrient rich currents here attract all kinds of fish to the area. Blue and Sperm whales are often spotted close to the coast, and pods of dolphins and pilot whales are regular visitors to these waters. The Isla de los Lobos is a protected nature park, which has areas of marine wetlands that are vital stopover spots for birds that are on the western migration route from Africa to Europe.

For the first time in a long time now, some species are nesting on the island, which is an indication that the island is becoming safer for birds. The climate change also plays an important role in the changing of the patterns that have existed for years. Plans are being made to reintroduce the Mediterranean monk seal. The seal colony almost became extinct because of the pirates who used to hunt them.

Try the World: Discover the World through Food

The way to Work From Residence … or Wherever

Things to Consider When Renting a Car in Uganda