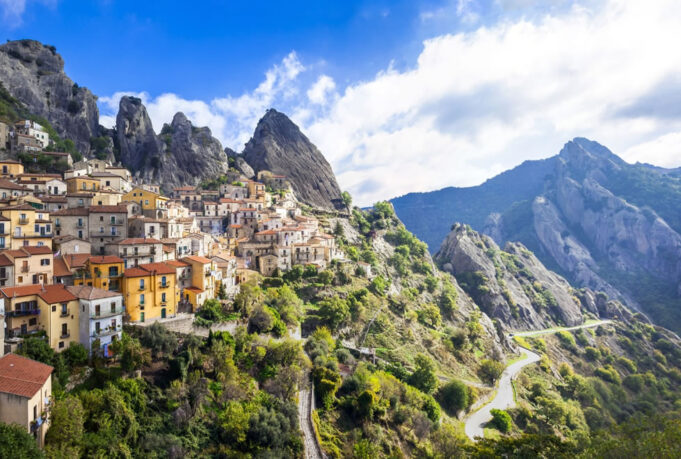 With its many romantic castles, sandy coves, dense forests and quaint little rock-hewn churches, Basilicata in the south of Italy is a region that has been largely neglected by tourists. Even for the Italians themselves it is something of a backwater, often regarded as culturally behind the times and unworthy of serious attention, let alone a holiday. This is a pity, because as the more adventurous tourists are finding out it has a great deal to offer, and it is most conveniently explored by taking advantage of the numerous cheap car hire deals that are on offer these days.

Basilicata is very similar to its close neighbour Calabria in terms of history, spirit and landscape, but whereas the latter has seen great development since the late 19th century and is peppered with resorts on its two stretches along the Ionian and Tyrrhenian shores, Basilicata has been left largely undisturbed. It has a mountainous backbone descending dramatically to the shores, but it lacks Calabria’s long coastline and sandy beaches which create the island-like atmosphere which visitors find so attractive.

Hiring a car here makes perfect sense, and this is especially so if you’re thinking of a tour of the region rather than basing yourself in just the one town. It’s not expensive to stay at farms and hotels along the route, and neither is it necessary to reserve in advance unless you’re heading to the beaches during the peak season of July and August. You can do a complete tour of the whole region in a week, and the roads are excellent, taking you to the most remote parts.

If you feel like giving the motor a break and using the train, the rail links are also very good, with the short coastlines with the Tyrrhenian and Ionian Seas served by the FS state railways (Ferrovie dello Stato) and Matera is connected to Puglia via the Ferrovie Calabro-Lucane line. Either way, Basilicata has good transport links and it’s easy to explore all its natural and cultural wonders with ease.

The main established destinations here for tourists are a complex of cave homes at the Sassi di Matera and a chic resort at Maratea, though they’re tricky to find on a typical map of the region and have to be sought out in most cases. Even the national park of Pollino, which is actually fairly evenly split between Basilicata and Calabria, is popularly thought to be associated with Calabria. So Basilicata deserves attention and even some apologies for having been treated as a second-class citizen in its own country and neglected by visitors until very recently.

One of the best combinations of historic sites and natural beauty in Italy is in fact to be found in the area around Melfi, which is easily explored by car, where the magnificent Castello di Melfi has particular Crusader connections. It’s an ideal spot for lunch before heading on out for other attractions such as the City of Caves, a troglodyte wonder of Southern Italy, and the beautifully preserved ancient Roman city of Venusia.

Take a car round Basilicata and you’ll be amazed that such untouched landscapes still exist in a country that has overdosed on tourism of one form or another for several hundred years now.

David Elliott is a freelance writer who loves to travel, especially in Europe and Turkey. He’s spent most of his adult life in a state of restless excitement but recently decided to settle in North London. He gets away whenever he can to immerse himself in foreign cultures and lap up the history of great cities.

This article was written in conjunction with carhiremarket.com

Gokyo Trail: An Alternative Route to Everest Base Camp

Top 5 Places To Visit As A Travel Couple

The Best Beaches: Dominican Republic – Vacation along the Atlantic Coast